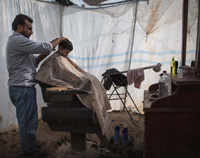 Growing Home
Samer, a displaced Syrian barber, has taken refuge along with his young family in the Zaatari Refugee Camp in Jordan. Despite filling his time with meaningful work, caring for his family and improving his living conditions, the daily distractions cannot diminish his desire to return home.
more info

Hotline
The Hotline for Refugees and Migrants is a Tel Aviv-based NGO. In exactly inverse proportion to the small scale of this human rights organization, the issues they deal with are universal, and the number of those seeking help is enormous.
more info

In the Image: Palestinian Women Capture the Occupation
The film focuses on the personal lives of several Palestinian women living in the West Bank through video footage captured by the women themselves, an initiative launched by the Jerusalem-based human rights organization B’Tselem.
more info

Kingdom of Garbage
Zahraa dreams of going to school, but she and her brother Hassan must scour a landfill site for valuable materials to provide for their poor family. When a trade between Zahraa and the self-proclaimed "King of Garbage" goes wrong, the siblings' relationship is tested.
more info