One Minute
The last minutes of a mother and a baby, the 5-minute warning to evacuate, during Israel's war on Gaza in the summer of 2014 and the intensive attack on the Shujaiya neighborhood.
more info

Partner with the Enemy
Two women, one Israeli and one Palestinian, attempt to build a business together. Fighting against societal and family pressure, anti-normalization currents and a chauvinistic, male-dominated industry, the two combine forces to create a logistics company which helps Palestinian businessmen to navigate the every-day absurdities of Israeli control of the West Bank.
more info 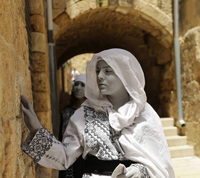 Past Tense Continuous
Three Palestinian refugee families on a continuous journey that started 66 years ago. Ramallah-based artist Dima Hourani recreates memories of the Nakba as she unfolds her interventionist artwork: a simulation that links history to the present, manipulating our visual conception into an image of subjectivity and community.
more info

Pionničres
In 2012, Libya participated in its first democratic, national election following 42 years under the dictatorship of Gaddafi, as well as 6 months of civil war and 20,000 casualties. For the first time, even women were allowed to run for office and 625 women (of the more than 3500 candidates) entered the race.  Pionničres (Pioneers) focuses on two women and their campaign.
more info