Dying for a Drink - Gaza War: 1 Year Later
The Israel-Gaza War in 2014 killed more than 2,000 people and decimated Gaza's infrastructure. A year afterward, AJ+ hears from a water delivery driver about how many people are not getting enough of this crucial resource.
more info 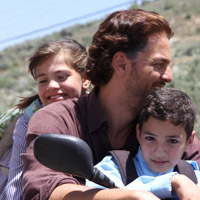 Eyes of a Thief
Based in part on an incident that took place in Wadi al-Haramieh ("Valley of the Thieves") from which the film takes its title, the story focuses on a water engineer, Tareq, who has just been released from jail.
more info

Fest of Duty
'Fest of Duty' is a religious ceremony designed to instill Islamic beliefs and values in girls when they reach the age of nine and puberty begins. The film follows two adolescent cousins as they transition into adulthood eight years after their official 'age of duty' ceremony.

Gift of my Father
A seemingly normal car journey crosses from present reality into a recurring nightmare as Hamoudi, a young victim of war, relives his traumatic experiences. This film is based on real events that occurred in 2007 when employees of the private US security company Blackwater killed 17 civilians in Baghdad.
more info