Item posted on: 26-01-2016 -- 18:00
Desperately Seeking Understanding
Friday, November 20, 2015 at 8pm, only one week after "the drama" that hit Paris. Few people entering the theatre. Then all at once, they start coming in, slowly but steadily.  The small arthouse cinema The 3 Luxembourg is soon packed.

There are guards checking all who enter of course, a prerequisite requested by the police. Yet the opening night atmosphere is relaxed, largely because of Leila Shahid, in top form. She may have retired from her position as ambassadress from Palestine to the European Union, but she has not lost her spirit. The audience laughs at her pragmatism, laced with humour, never ideological.

This 7th edition of the festival is tinged with heaviness, but one feels an insatiable desire to understand among the contributors as much as in the audience. Understand what so recently happened under their eyes in Paris. But also understand what is at stake in the close future for the Middle East, in Libya, Egypt, in Damascus and Teheran. "Your wars, our dead" some cried, after January 7th, after November 13. A slogan which stands out clearly during the festival. During the Arab Spring, aborted or not, peoples arose and regimes repressed them in blood and violence.

So yes, the selection of films proposed to audiences during the biennial was not exactly "light". The news from the Middle East is not either. What the festival seeks to project is a factual, pragmatic understanding of the events, in the hope of finding words for such suffering. The debate participants for the most part attempted to explain, in carefully chosen words, always referring to facts of these complex situations hinged on religious, ethnic and political quarrels. This 7th edition of Middle East, What Cinema Can Do will be remembered as a place reaching out for perspective heights in troubled times. 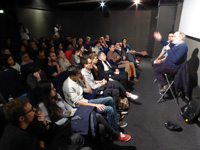