"Lost in Paris, I try to remember what Syria was like before the revolution, and most of all, the Palestinian refugee camp Yarmouk where my friend Hassan lived before he was imprisoned, tortured and killed by the government in power."

Axel Salvatori-Sinz was born in 1982, studied anthropology specializing in Arabic and Muslim societies before obtaining a Masters in documentary filmmaking. His first film, The Shebabs of Yarmouk was selected at more than 80 festivals around the world. It won numerous awards, notably in Nyon, Switzerland at the documentary festival Visions du Reel, before being released to cinemas in France.

Filmography
2012 : The Shebabs of Yarmouk 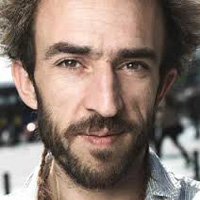