Not Anymore: A Story of Revolution

The story of the Syrian revolution as told through the experiences of two young Syrians, a male rebel fighter and a female journalist, as they fight an oppressive regime for the freedom of their people.

Matthew VanDyke, Masters in Security Studies from the Georgetown University School of Foreign Service, traveled for years as a documentary filmmaker and notably filmed the wars in Iraq and Afghanistan. VanDyke founded the security firm Sons of Liberty International (SOLI) in 2014, providing free military advising, after two of his friends, journalists James Foley and Steven Sotloff, were beheaded by ISIS. 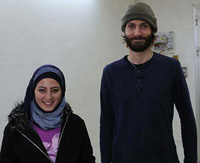