The Photographer Behind the Photo

For the sixth edition, Middle East: What Cinema Can Do, chose to cover the catalogue and site with a photo taken by a photographer from Gaza.

Eman Mohammed, 25, was born in Saudi Arabia and educated in Gaza City, Palestine where she started her photojournalism career at the age of 19 in 2006.

Eman's work focuses on documenting the Israeli-Palestinian conflict, including invasions and wars that frequently occur in the area and the formation of armed militant groups in the strip.

The main body of her work has moved from covering the Israeli bombing blitz of Gaza in 2008-2009 to a long series of sensitive women's issues and other long term projects.

She has contributed to many publications around the world - the Guardian, Le Monde, The Washington Post, Geo International, Mother Jones, Haartez… and has had numerous exhibits such as "Beware of the Cost of War" (London, 2009), "Where are the Human Rights?" (Montreal, 2009), "Generation 9/11" (The Netherlands, 2011) and "Women on the Verge" (Dubai, 2012). Her last exhibit, "Individual Journey", was shown in Vienna, Israel and Iran (2013).

Eman Mohammed's work was recently acquired by the British Museum in London. 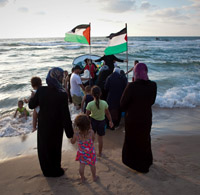