The sixth edition of Middle East: What Cinema Can Do is set to unfold in the usual venue in Paris continuing the biennial's intent to inform, create awareness and stimulate dialogue, with a ten-day programme of shorts, mid-length and feature fiction and documentary films from Egypt, Iraq, Iran,  Israel, Lebanon, Libya, Palestine and Syria. But first a little background concerning the event.
Israelis-Palestinians: What Can Cinema Do?
was the name of the first two editions of this biennale festival. The first was held from 26 March to 1 April 2003, quickly making its mark as an event not to miss, an event that can be qualified as the only biennale festival in Europe bringing these "enemies" together on the same programme. 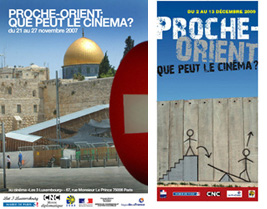 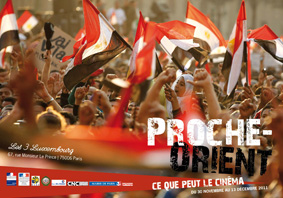 In 2011. The name changed again: Middle East: What Cinema Can Do, in the affirmative form! And it lasted for two weeks.  In view of the latest Arab Spring developments, it was necessary to add this new theme, marking the inclusion of Egypt for the first time.

recent articles
Revue de Presse/ Press Clippings
Television, radio, newspapers and magazines, websites, the 6th edition of Middle East: What Cinema Can Do was held from 29 November to the 8 December 2013. (in French)

At the Center of Current Events
Since our last biennale in December 2011, the Middle East has barely gone a day without making the headlines. The wave of revolutions that swelled then is still rumbling in the lower depths, but its enemies have also rallied: more than 100,000 have died so far in the civil war in Syria alone.
more info

At First Glimpse
The 6th edition of the biennial film event Middle East: What Cinema Can Do will unfold from the 29 November to 8 December at the usual venue, Les 3 Luxembourg. The catalogue is at the printers, invitations sent, final preparations in the works, and it is with great anticipation that we would like to share the highlights of the upcoming event.

The Photographer Behind the Photo
For the sixth edition, Middle East: What Cinema Can Do, chose to cover the catalogue and site with a photo taken by a photographer from Gaza.

The Debates
Once again, the festival has invited well-known personalities to participate in the debates, such as Michel Warschawski, Bernard Hourcade, Samir Aita, Elias Sanbar and more.
more info

Looking for Volunteers
Interested in the Middle East, bilingual, cinema buff, photography buff, looking for an activity, for whatever reason, volunteer your services to enhance the next edition of our event. 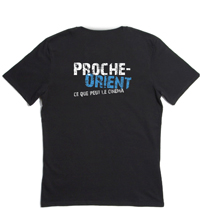