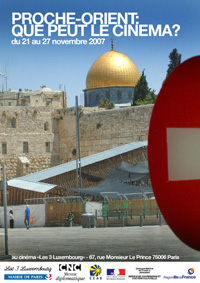 For 2009, marking the festival's fourth edition, many of the themes will be revisited in new works by Middle Eastern filmmakers as the region shows no sign of improving. A new focus is added, that of Iran and the growing unrest among the young people.

Furthermore, Middle East: What Can Cinema Do? is no longer a film week, but rather runs over 12 days.

Held at the cinema Les 3 Luxembourg, art house cinema owners Gérard and Anne Vaugeois have played an essential role in hosting Middle East: What Can Cinema Do?. Their dedication to bringing thought-provoking films and filmmakers to meet movie audiences on a regular basis has guaranteed that the event and the venue have been in perfect symbiosis. 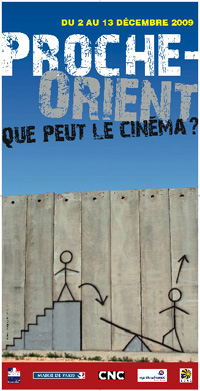 recent articles
Press Clippings
The 4th edition of Middle East: What Can Cinema Do was talked about in numerous media.

Country by Country - The Program
50 films during 12 days are programmed for the 4th edition. Documentaries are in the majority, but more fiction is being presented than ever before including four "premieres". Two-thirds of the films are feature or TV length films, complemented by another fifteen short films. Here follows a country by country glimpse at the film program.
more info

Poster photo
Anne Paq has been photographing Palestine since 2003. She is the photographer behind the photo illustrated in our poster for the 2009 edition.
more info

A Word from the Festival Director
Two years ago, our editorial opened with the words: From anguish to hope. Since then, as far as the Israeli-Palestinian conflict is concerned, the situation has worsened.
more info

A Word from our Sponsors
A message from the Mayor of Paris, Bertrand Delanoë, and the President of the Centre National du cinéma et de l'image animée (CNC), Véronique Cayla
more info